Connecting an iPod® player enables you to enjoy music from the vehicle speakers. 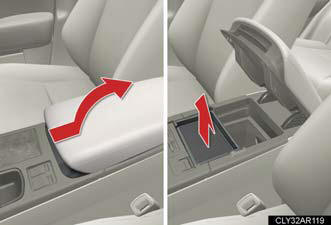 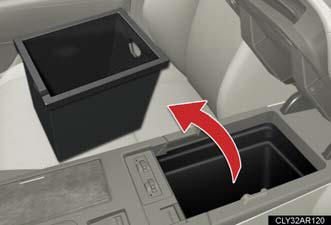 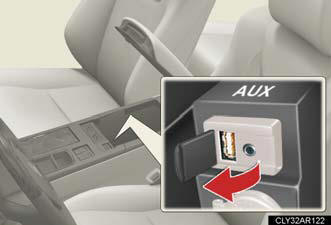 Open the cover and connect an iPod® player using an iPod® cable. 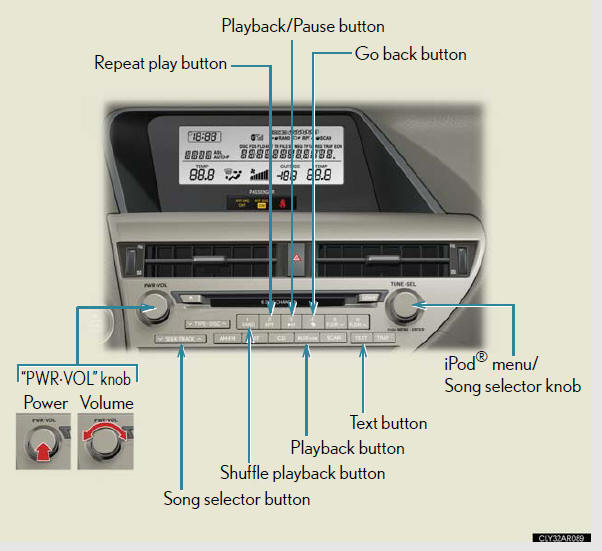 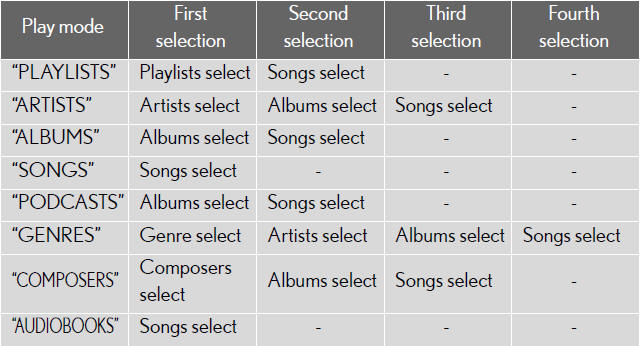 Pressing the knob changes to the second selection list.

3. Repeat the same procedure to select the desired item.

to select the desired song.

iPod is a registered trademark of Apple Inc.

When an iPod® player is connected and the audio source is changed to iPod® player mode, the iPod® player will resume play from the same point in which it was last used.

Depending on the iPod® player that is connected to the system, certain functions
may not be available. If a function is unavailable due to a malfunction (as opposed to a system specification), disconnecting the device and reconnecting it once again may resolve the problem.

While connected to the system, the iPod® player cannot be operated with its own controls. It is necessary to use the controls of the vehicle's audio system instead. 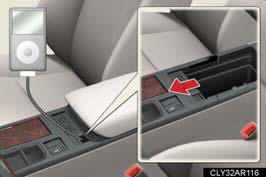 When the cover is slid open, portable audio device cables can be pulled through the opening.

“ERROR”: This indicates a problem in the iPod® player or its connection.

“NO MUSIC”: This indicates that there is no music data in the iPod® player.

“UPDATE”: This indicates that the version of the iPod® player is not compatible.

Upgrade your iPod® software to the latest version.

Items related to standards and limitations are as follows: Maximum number of lists in device: 9999.

CAUTION:
Caution while driving
Do not connect iPod® players or operate the controls.

Do not insert foreign objects into the port as this may damage the iPod® player
or its terminal.

Alarm
The system sounds the alarm and flashes the lights when forcible entry is detected. Triggering of the alarm The alarm is triggered in the following situations: A locked door is unlocked or opened ...

Theft prevention labels (for USA)
These labels are attached to the vehicle to reduce vehicle theft by facilitating the tracing and recovery of parts from stolen vehicles. Do not remove under penalty of law. ...