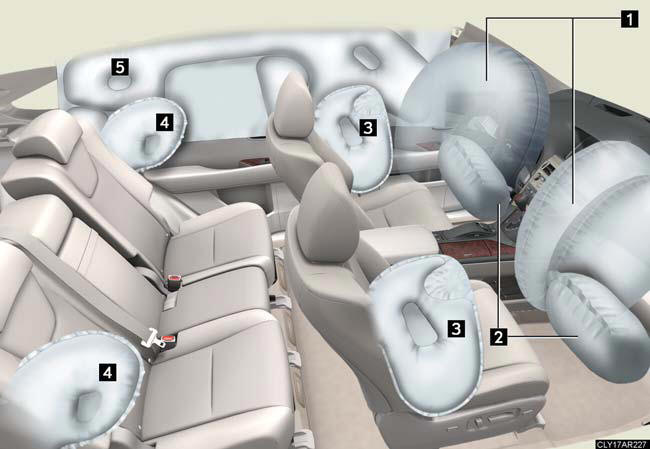 - SRS side and curtain shield airbags.

Can help protect the torso of the front seat occupants.

Can help protect the torso of occupants in the rear outer seats.

Can help protect primarily the head of occupants in the outer seats. 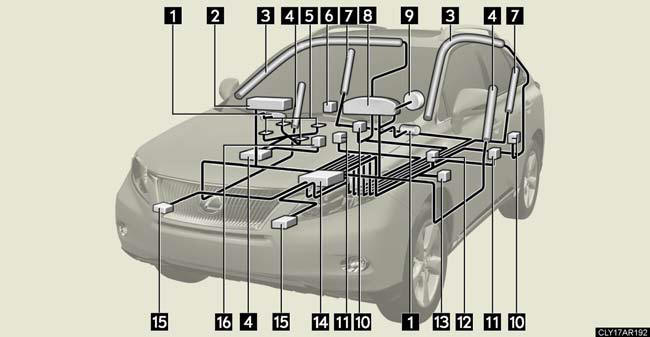 Bruising and slight abrasions may result from contact with a deploying (inflating)
SRS airbag.

A loud noise and white powder will be emitted.

Parts of the airbag module (steering wheel hub, airbag cover and inflator) as well as the seats, parts of the front and rear pillars, and roof side rails, may be hot
for several minutes. The airbag itself may also be hot.

The windshield may crack.

For Safety Connect subscribers, if the SRS airbags deploy or in the event of a severe rear-end collision, the system is designed to send an emergency call to the response center, notifying them of the vehicle’s location (without needing to
push the “SOS” button) and an agent will attempt to speak with the occupants to ascertain the level of emergency and assistance required. If the occupants are unable to communicate, the agent automatically treats the call as an emergency
and helps to dispatch the necessary emergency services.

The front SRS airbags will deploy in the event of an impact that exceeds the set threshold level (the level of force corresponding to a 12 - 18 mph [20 - 30 km/h] frontal collision with a fixed wall that does not move or deform).

However, this threshold velocity will be considerably higher if the vehicle strikes
an object, such as a parked vehicle or sign pole, which can move or deform on impact, or if the vehicle is involved in an underride collision (e.g. a collision in
which the front of the vehicle “underrides”, or goes under, the bed of a truck etc.).

It is possible that in some collisions where the forward deceleration of the vehicle
is very close to the designed threshold level, the SRS front airbags and the seat belt pretensioners may not activate together.

The SRS side airbags and SRS curtain shield airbags will deploy in the event of an
impact that exceeds the set threshold level (the level of force corresponding to the
impact force produced by a 3300 lb. [1500 kg] vehicle colliding with the vehicle cabin from a direction perpendicular to the vehicle orientation at a speed of 12 - 18
mph [20 - 30 km/h]).

Conditions under which the SRS airbags may deploy (inflate), other than a collision
(SRS front airbags) 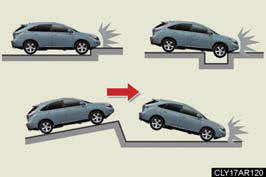 Falling into or jumping over a deep hole.

The SRS curtain shield airbags may also deploy under the situations shown in the
illustration. 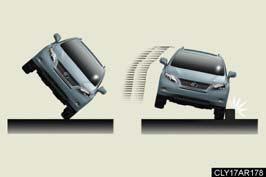 The angle of vehicle tip-up is marginal.

The vehicle skids and hits a curb stone. 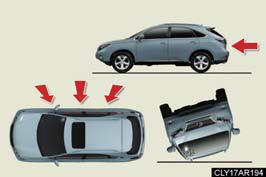 Collision from the side. 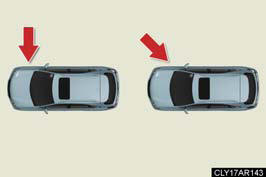 Collision from the side at an angle. 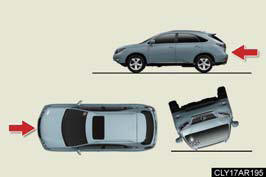 Collision from the front.

Any of the SRS airbags has been inflated. 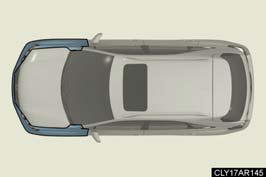 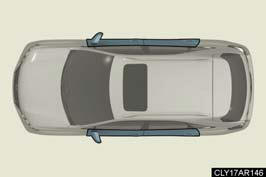 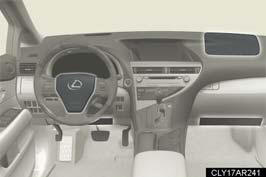 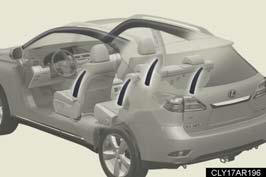 The surface of the seats with the side airbag is scratched, cracked, or otherwise damaged.

The portion of the front pillars, rear pillars or roof side rail garnishes (padding) containing the curtain shield airbags inside is scratched, cracked, or otherwise damaged.

The driver and all passengers in the vehicle must wear their seat belts properly.

The SRS driver airbag deploys with considerable force, and can cause death or serious injury especially if the driver is very close to the airbag. The National
Highway Traffic Safety Administration (“NHTSA”) advises: Since the risk zone for driver’s airbag is the first 2 - 3 in. (50 - 75 mm) of inflation,
placing yourself 10 in. (250 mm) from your driver airbag provides you with a clear margin of safety. This distance is measured from the center of the steering
wheel to your breastbone. If you sit less than 10 in. (250 mm) away now, you can change your driving position in several ways: • Move your seat to the rear as far as you can while still reaching the pedals comfortably.

• Slightly recline the back of the seat.

Although vehicle designs vary, many drivers can achieve the 10 in. (250 mm) distance, even with the driver seat all the way forward, simply by reclining the back of the seat somewhat. If reclining the back of your seat makes it hard to see the road, raise yourself by using a firm, non-slippery cushion, or raise the seat if your vehicle has that feature. 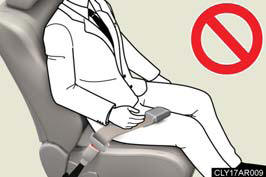 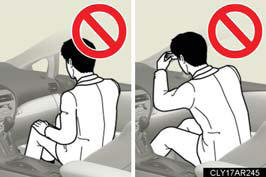 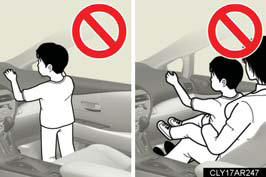 Do not allow the front seat occupants to hold items on their knees. 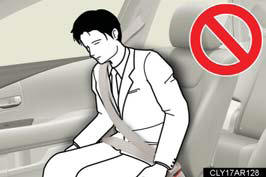 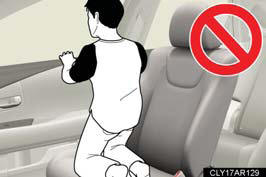 Do not allow anyone to kneel on the passenger seats toward the door or put their head or hands outside the vehicle. 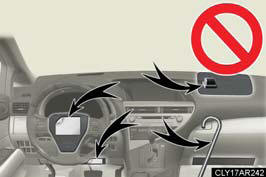 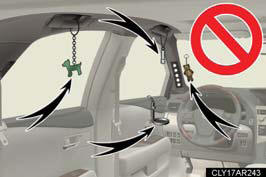 Do not hang coat hangers or other hard objects on the coat hooks. All of these items could become projectiles and may cause death or serious injury, should the SRS curtain shield airbags deploy.

l If a vinyl cover is put on the area where the SRS knee airbags will deploy, be sure
to remove it.

Do not use seat accessories which cover the parts where the SRS side airbags inflate as they may interfere with inflation of the airbags. Such accessories may
prevent the side airbags from activating correctly, disable the system or cause the
side airbags to inflate accidentally, resulting in death or serious injury.

Do not strike or apply significant levels of force to the area of the SRS airbag
components.

Do not touch any of the component parts immediately after the SRS airbags have deployed (inflated) as they may be hot.

If breathing becomes difficult after the SRS airbags have deployed, open a door
or window to allow fresh air in, or leave the vehicle if it is safe to do so. Wash off
any residue as soon as possible to prevent skin irritation.

If the areas where the SRS airbags are stored, such as the steering wheel pad and
front and rear pillar garnishes, are damaged or cracked, have them replaced by your Lexus dealer.

Modification and disposal of SRS airbag system components Do not dispose of your vehicle or perform any of the following modifications without
consulting your Lexus dealer.

Installation, removal, disassembly and repair of the SRS airbags Repairs, modifications, removal or replacement of the steering wheel, instrument
panel, dashboard, seats or seat upholstery, front, side and rear pillars or roof side
rails
Repairs or modifications of the front fender, front bumper, or side of the occupant
compartment
Installation of snow plows, winches, etc. to the front grille (bull bars or kangaroo
bar etc.)
Modifications to the vehicle's suspension system Installation of electronic devices such as mobile two-way radios or CD players Modifications to your vehicle for a person with a physical disability

If you have a flat tire
Remove the flat tire and replace it with the spare provided. Before jacking up the vehicle Stop the vehicle on a hard, flat surface. Set the parking brake. Shift the shift lever to P. Vehicles wi ...

Chassis/Body/Suspension/Tires/Brakes
The Lexus ES 350 owes its smooth, quiet ride in large part to a rigid unibody structure that allows the four-wheel independent suspension to be tuned to provide responsive handling agility and ult ...