Drive in a good posture as follows: 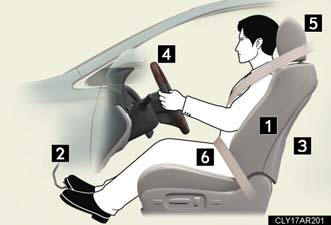 1. Sit upright and well back in the seat.

2. Adjust the position of the seat forward or backward to
ensure the pedals can be reached and easily
depressed to the extent
required.

3. Adjust the seatback so that the controls are easily operable.

4. Adjust the tilt and telescopic positions of the steering wheel downward so the airbag is facing your chest.

CAUTION:
While driving
Do not adjust the position of the driver’s seat.

Doing so could cause the driver to lose control of the vehicle.

Do not place a cushion between the driver or passenger and the seatback.

A cushion may prevent correct posture from being achieved, and reduce the effectiveness of the seat belt and head restraint, increasing the risk of death or
serious injury to the driver or passenger.

Do not place anything under the front seats.

Objects placed under the front seats may become jammed in the seat tracks and stop the seat from locking in place. This may lead to an accident, resulting in death or serious injury. The adjustment mechanism may also be damaged.

Do not put your hands under the seat or near the moving parts to avoid injury.

Fingers or hands may become jammed in the seat mechanism.

High Body Rigidity
Particular attention has been paid to promoting superior handling stability through the structural rigidity of the bodyshell. The Lexus CT 200h's torsional stiffness has been enhanced and vibratio ...