Your preferred driving position (the position of the driver's seat, steering
wheel and outside rear view mirrors) can be memorized and recalled with the touch of a button. It is also possible to set this function to activate automatically
when the doors are unlocked.

Three different driving positions can be entered into memory.

2. Adjust the driver’s seat, steering wheel and outside rear view mirrors to the desired positions.

1. Check that the shift lever is set in P. 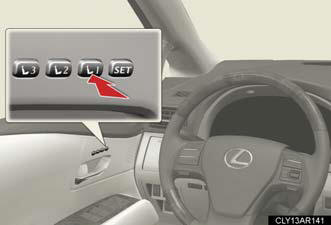 1. Shift the shift lever to P and close the driver's door. Turn the “POWER” switch to ON mode. 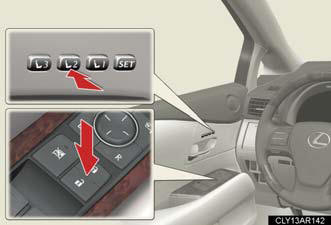 2. Press the desired button (“1”, “2” or “3”) to recall the position. Then, while keep pressing the button, press the driver's door lock switches (either lock or unlock) until the signal beeps.

Operating the driving position memory after turning the “POWER” switch off

Memorized positions (except for the steering wheel position) can be activated up
to 180 seconds after the driver’s door is opened and another 60 seconds after it is
closed again, even after turning the “POWER” switch off.

1. Turn the “POWER” switch to ON mode and close the driver's door.

2. While pressing the “SET” button, press the driver’s door lock switches (either lock or unlock) until the signal beeps.

Perform any of the following operations: Press the “SET” button.

When the seat is in the most forward or most backward position, and the seat is
being moved in those directions, the system may not correctly recognize the current
position and the memorized position will not be correctly recalled.

If a seat position is memorized, the driver seat will move back the set distance
from that memorized position.

CAUTION:
Seat adjustment caution
Take care during seat adjustment so that the seat does not strike the rear passenger
or squeeze your body against the steering wheel.