The following operations can be performed simply by carrying the electronic
key (including the card key) on your person, for example in your pocket.

(The driver should always carry the electronic key.) 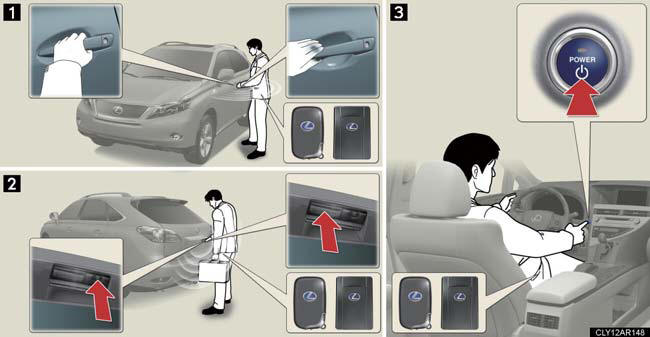 1. Locks and unlocks the side doors.

2. Locks and unlocks the back door .

Unlocking and locking the side doors (front door handles only) 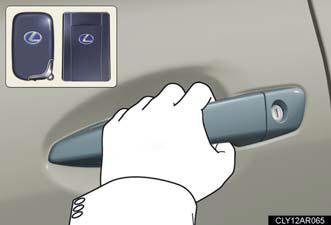 Grip the handle to unlock the door.

Make sure to touch the sensor on the back of the handle.

The doors cannot be unlocked for 3 seconds after the doors are locked. 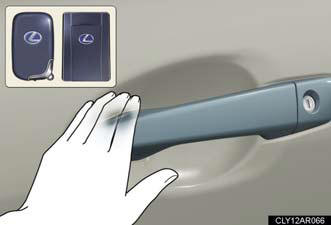 Touch the lock sensor (the indentation on the upper part of the door handle) to lock the doors.

Unlocking and locking the back door 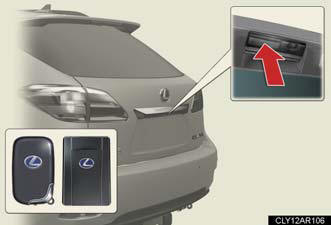 Press the button to unlock the door.

The door cannot be unlocked for 3 seconds after the door is locked. 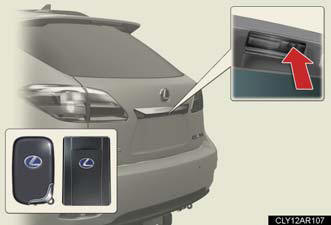 Press the button to lock the door. 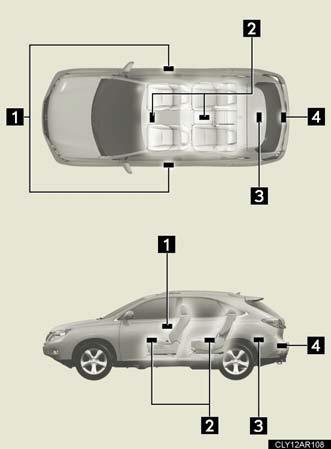 1. Antennas outside the cabin.

2. Antennas inside the cabin.

3. Antenna inside the luggage compartment.

4. Antenna outside the luggage compartment.

Effective range (areas within which the electronic key is detected) 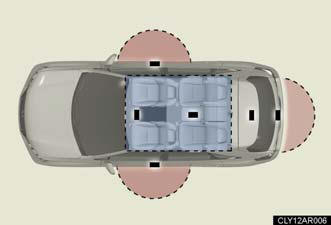 When locking or unlocking
the doors.

The system can be operated when the electronic key is within about 2.3 ft. (0.7 m) of an outside door handle. (Only the doors detecting the key can be operated.)

When starting the hybrid
system or changing
“POWER” switch modes.

The system can be operated when the electronic key is inside the vehicle.

A buzzer sounds and the emergency flashers flash to indicate that the doors have
been locked/unlocked. (Locked: Once; Unlocked: Twice) 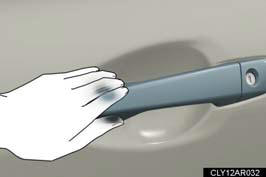 Touch both lock sensors on the upper and lower part of the door handle simultaneously.

The following table describes circumstances and correction procedures when only alarms are sounded. 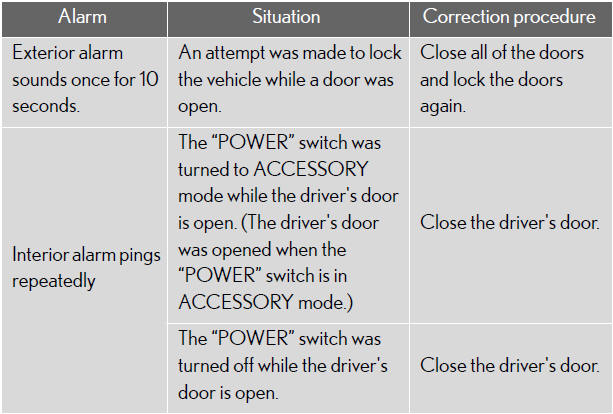 If a door is not opened within approximately 60 seconds after the vehicle is unlocked, the security feature automatically locks the vehicle again.

In the following circumstances, the entry function is disabled in order to prevent the
vehicle 12-volt battery from discharging and the electronic key battery from depleting.

The system will resume operation when: The vehicle is locked using the lock sensor.

The vehicle is locked/unlocked using the wireless remote control function.

The vehicle is locked/unlocked using the mechanical key.

When the electronic key battery is depleted.

When the electronic key is in contact with, or is covered by the following metallic
objects.

• Cards to which aluminum foil is attached.

• Cigarette boxes that have aluminum foil inside.

• Hand warmers made of metal.

• Media such as CDs and DVDs.

When multiple electronic keys are in the vicinity.

When another wireless key (that emits radio waves) is being used nearby.

When carrying the electronic key together with the following devices that emit radio waves.

• Another vehicle's electronic key or a wireless key that emits radio waves.

If window tint with a metallic content or metallic objects are attached to the rear
window.

Note for the entry function

l Even when the electronic key is within the effective range (detection areas), the
system may not operate properly in the following cases: • The electronic key is too close to the window or outside door handle, near the ground, or in a high place when the doors are locked or unlocked.

• The electronic key is on the instrument panel, luggage cover or floor, or in the
glove box.

The doors may lock or unlock if the electronic key is within the effective range
and a large amount of water splashes on the door handle, such as in the rain or in a car wash. The doors will automatically be locked after approximately 60 seconds if a door is not opened and closed.

Notes for locking the doors

Touching the door lock sensor while wearing gloves may delay or prevent lock operation. Remove the gloves and touch the lock sensor again.

If the door handle becomes wet while the electronic key is within the effective
range, the door may lock and unlock repeatedly. Place the key in a position 6 ft.

(2 m) or more separate from the vehicle while the vehicle is being washed. (Take care to ensure that the key is not stolen.) If the electronic key is inside the vehicle and a door handle becomes wet during
a car wash, a message may be shown on the multi-information display and a buzzer will sound outside the vehicle. To turn off the alarm, lock all the doors.

Fingernails may scrape against the door during operation of the door handle.

Be careful not to injure fingernails or damage the surface of the door.

Notes for the unlocking function

Gripping the door handle when wearing a glove may not unlock the door.

If there is another electronic key in the detection area, it may take slightly longer
to unlock the doors after the door handle is gripped.

When the vehicle is not driven for extended periods

The smart access system with push-button start can be deactivated in advance.

To operate the system properly

Depending on the position and holding condition of the electronic key, the key may
not be detected correctly and the system may not operate properly. (The alarm may
go off accidentally, or the door lock prevention may not function.)

Locking and unlocking the doors: Use the mechanical key.

• The smart access system with push-button start or the wireless remote control does not operate.

• The LED indicator on the key surface does not turn on.

To avoid serious deterioration, do not leave the electronic key within 3 ft. (1 m) of
the following electrical appliances that produce a magnetic field: • TVs.

Certification for the smart access system with push-button start

This system meets the certification requirements of Radio Low.

NOTE:
This device complies with part 15 of the FCC Rules. Operation is subject to the following
two conditions: (1) This device may not cause harmful interference, and (2) this device must accept any interference received, including interference that may
cause undesired operation.

FCC WARNING:
Changes or modifications not expressly approved by the party responsible for compliance could void the user's authority to operate the equipment.

For vehicles sold in Canada.

CAUTION:
Caution regarding interference with electronic devices People with implanted pacemakers or cardiac defibrillators should keep away from the smart access system antennas.

The radio waves may affect the operation of such devices. If necessary, the entry
function can be disabled. Ask your Lexus dealer for details, such as the frequency
of radio waves and timing of emitting the radio waves. Then, consult your doctor to see if you should disable the entry function.

User of any electrical medical device other than implanted pacemakers and implanted cardiac defibrillators should consult the manufacturer of the device for
information about its operation under the influence of radio waves.

Radio waves could have unexpected effects on the operation of such medical devices.

Ask your Lexus dealer for disabling the entry function.

Fifth Gear Lexus LS review
Could this be the LS that finally catapults Lexus into the big time? The all-new fourth generation car is a big step forward over its predecessors, especially the slab-sided model it replaces. Now ...