Airflow and outlets are automatically adjusted according to the temperature
setting.


Owners of models equipped with a navigation system should refer to the “Navigation System Owner's Manual”. 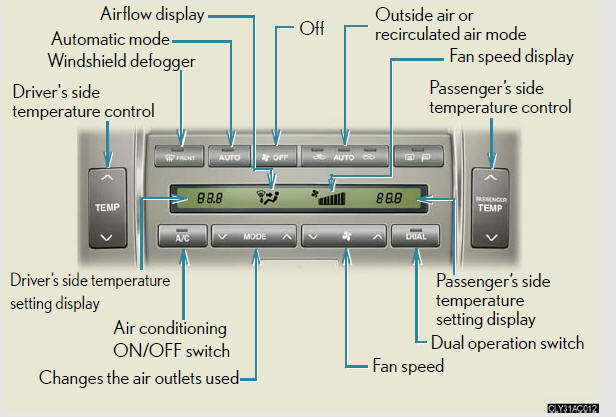 The air conditioning system will
begin to operate. Air outlets and fan speed are automatically adjusted according to the temperature setting.

to switch to automatic
mode.

Automatically switches between
outside air and recirculated air modes.

to increase the
temperature and

to decrease the
temperature on the


The temperature for the driver and passenger seats can be set separately.

to increase the temperature
and

to decrease the temperature
on the

switch to separately
adjust the temperature for the passenger and driver sides (dual mode).

to return the driver and
passenger side temperatures to the same setting (simultaneous mode).

to turn the fan off. 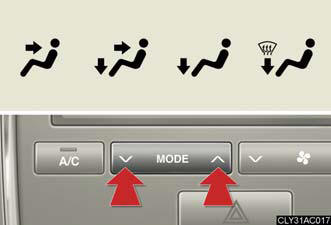 The air outlets switch each time the switch is pressed. 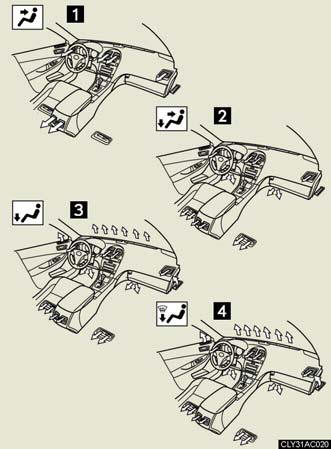 1. Air flows to the upper body.

2. Air flows to the upper body and feet.

4. Air flows to the feet and the windshield defogger operates.

Switching between outside air and recirculated air modes


The mode switches between

(recycles
air inside the vehicle), AUTO and

(introduces air from
outside the vehicle) modes each time the switch is pressed.

When the system is switched to automatic mode, the air conditioning system operates automatically. 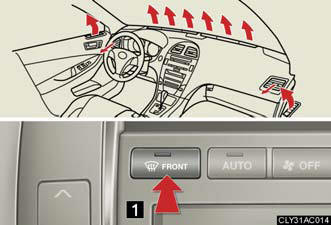 Adjusting the sensitivity of the air intake control in automatic mode 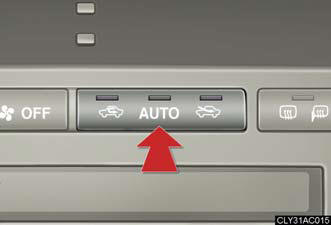 for 2 or more seconds. 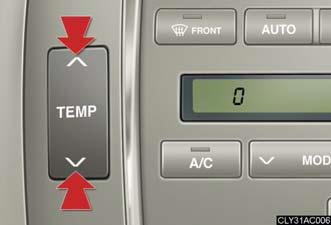 Adjusting the position of and opening and closing the air outlets 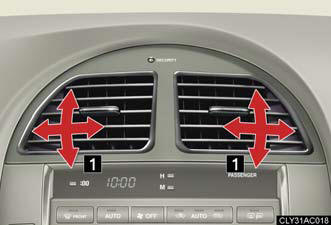 1. Direct air flow to the left or right, up or down

Front outlets (right and left
side) 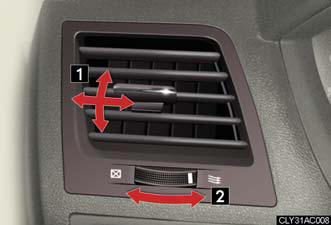 1. Direct air flow to the left or right, up or down.

2. Turn the knob right to open the vent and left to close the vent. 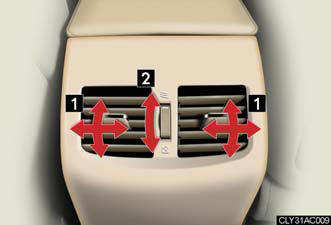 1. Direct air flow to the left or right, up or down.

2. Turn the knob up to open the vent and down to close the vent.

Fan speed is adjusted automatically in accordance with the temperature setting and
ambient conditions. As a result, the following may occur.

- Immediately after the switch is pressed, the fan may stop for a while until warm
or cool air is ready to flow.

- Cool air may flow to the area around the upper body when the heater is on.

The windows will fog up more easily if the recirculated air mode is used for an
extended period.

Switching between outside air and recirculated air modes

Recirculated air mode or outside air mode may be automatically switched to in accordance with the temperature setting and the inside temperature.

(outside air) mode in situations
where the windows need to be defogged.

The air conditioning system may not operate even when

When the indicator light on

In automatic mode, the system detects exhaust gas and other pollutants and automatically
switches between outside air and recirculated air modes.

CAUTION:
To prevent the windshield from fogging up Do not use

during cool air operation
in extremely humid weather. The difference between the temperature of the outside air and that of the windshield can cause the outer surface of the windshield to fog up, blocking your vision.

NOTICE:
To prevent battery discharge Do not leave the automatic air conditioning system on longer than necessary when the engine is stopped.

Safety/Security Features
The Lexus GX 460, like all Lexus models, is equipped with an array of dynamic safety systems. Vehicle Stability Control (VSC) helps keep the Lexus GX 460 going on its intended course by detecting ...