Performing the following operations when carrying the electronic key on your person starts the engine or changes “ENGINE START STOP” switch modes.

1. Check that the parking brake is set.

2. Check that the shift lever is set in P.

3. Sit in the driver’s seat and firmly depress the brake pedal. 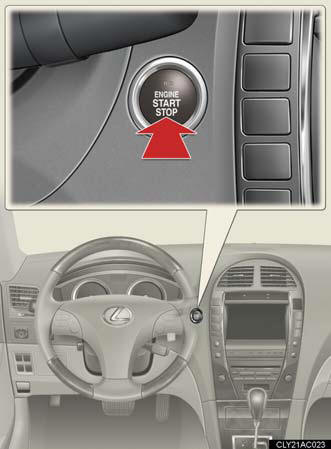 The engine can be started from any mode.

Modes can be changed by pressing the “ENGINE START STOP” switch with the brake pedal released. (The mode changes each time the switch is pressed.) 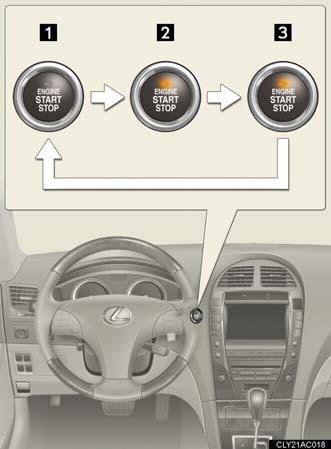 Emergency flashers can be used.

Some electrical components such as the audio system can be used.

All electrical components can be used.

*: If the shift lever is in a position other than P when turning off the engine, the “ENGINE START STOP” switch will be turned to ACCESSORY mode, not to
OFF.

If the engine does not start

The engine immobilizer system may not have been deactivated.

The system may be malfunctioning. Have the vehicle inspected by your Lexus dealer immediately.

If the vehicle is left in ACCESSORY mode for more than an hour with the shift lever
in P, the “ENGINE START STOP” switch will automatically turn off.

Doing so may cause an accident resulting in death or serious injury.

However, do not touch the “ENGINE START STOP” switch while driving except in an emergency. If the engine stops while the vehicle is being driven, this could lead to
an unexpected accident.

NOTICE:
To prevent battery discharge Do not leave the “ENGINE START STOP” switch in ACCESSORY or IGNITION ON mode for long periods without the engine running.

When starting the engine - Do not race a cold engine.

- If the engine becomes difficult to start or stalls frequently, have the engine checked immediately.

Interior
Where the RX really shines is in the cabin. The base RX 350 has a terrifically upscale interior for $37,250. Even at the hybrid's starting price of $42,110, it seems lush and well worth the money. ...

Driving position memory (driver’s seat)
Your preferred driving position (the position of the driver's seat, steering wheel and outside rear view mirrors) can be memorized and recalled with the touch of a button. It is also possible to s ...