Your preferred front passenger seat position can be memorized and recalled with the touch of a button.

Two different seat positions can be entered into memory.

Turn the “ENGINE START STOP” switch to IGNITION ON mode.

Adjust the front passenger seat to the desired position. 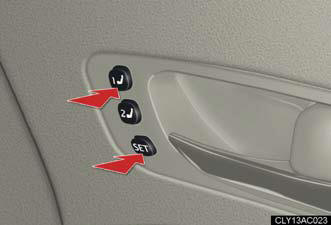 Push the “SET” button, then within 3 seconds push button 1 or 2 until the signal beeps.

Check that the shift lever is set in P. 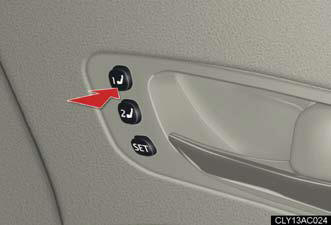 Push button 1 or 2 to recall the memorized position.

Memorized position can be activated up to 180 seconds after the front passenger
door is opened, even after turning the “ENGINE START STOP” switch OFF.

Perform any of the following operations.

If the battery is disconnected

The memorized positions are erased when the battery is disconnected.

Moon roof
Use the overhead switches to open, close, and tilt the moon roof up and down. Opening and closing Standard type 1. Open. The moon roof stops slightly before the fully opened position. Push th ...

Theft prevention labels (for USA)
These labels are attached to the vehicle to reduce vehicle theft by facilitating the tracing and recovery of parts from stolen vehicles. Do not remove under penalty of law. ...