The rear view monitor system assists the driver by displaying an image of the area behind the vehicle. The image is displayed in reverse on the screen. This reversed image is a similar image to the one on the inside rear view mirror. 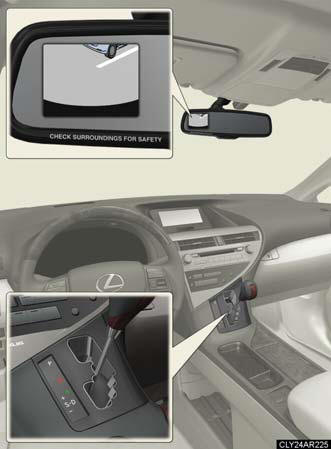 The rear view image is displayed when the shift lever is in the R position.

• If the shift lever is shifted out of R, the screen is turned off.

• The screen remains on for approximately 5 minutes.

The rear view monitor system can be operated when

The “POWER” switch is in ON mode and the back door is fully closed. 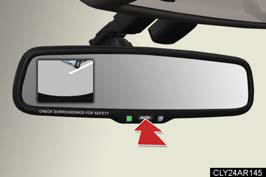 When the screen is displayed, press the “AUTO” button on the inside rear view mirror to switch the screen on/off.

Screen on: Green indicator comes on.

Screen off: Orange indicator comes on.

The auto anti-glare inside rear view mirror will revert to the screen on each time the “POWER” switch is turned to ON mode. 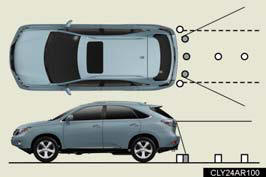 The area covered by the camera is limited.

Objects that are close to either corner of the bumper or under the bumper cannot be seen on the screen.

The area displayed on the screen may vary according to vehicle orientation or road conditions. 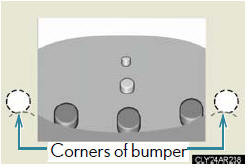 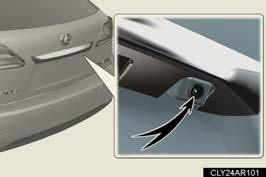 In the following cases, it may become difficult to see the images on the screen, even when the system is functioning correctly: The vehicle is in a dark area, such as at night.

The temperature near the lens is extremely high or low.

Water droplets are on the camera lens or humidity is high, such as when it rains.

The camera has scratches or dirt on it Foreign matter, such as snow or mud, adheres to the camera lens.

The sun or headlights are shining directly into the camera lens. 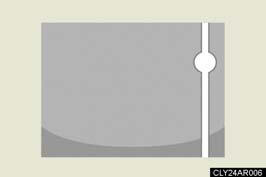 If a bright light, such as sunlight reflected off the vehicle body, is picked up by the camera, a smear effect* characteristic to the camera may occur.

*: Smear effect ⎯ A phenomenon that occurs when a bright light is picked up by the camera; when transmitted by the camera, the light source appears to have a vertical streak above and below it.

CAUTION:
When using the rear view monitor system, observe the following precautions to avoid an accident that could result in death or serious injuries: Never depend solely on the monitor system when reversing.

Always check visually and with the mirrors to confirm your intended path is clear.

Conditions which may affect the rear view monitor system If the back of the vehicle has been hit, the camera’s position and mounting angle
may have changed. Have the vehicle inspected by your Lexus dealer.

Rapid temperature changes, such as when hot water is poured on the vehicle in cold weather, may cause the system to function abnormally.

If the camera lens is dirty, it cannot transmit a clear image. Rinse with water and
wipe with a soft cloth. If extremely dirty, wash with a mild cleanser and rinse.

The displayed image may be darker and moving images may be slightly distorted when the system is cold.

As the camera is of water proof construction, do not detach, disassemble or modify it. This may cause incorrect operation.

Do not allow organic solvent, car wax, window cleaner or glass coating to adhere
to the camera. If this happens, wipe it off as soon as possible.

If you have a flat tire
Remove the flat tire and replace it with the spare provided. Before jacking up the vehicle Stop the vehicle on a hard, flat surface. - Set the parking brake. - Shift the shift lever to P. - Stop ...

Using the steering wheel audio switches
Some audio features can be controlled using the switches on the steering wheel. 1. Turns the power on, selects an audio source. 2. Increases/decreases volume. 3. Radio mode: Selects a radio st ...

Immobilizer system
The vehicle's keys have built-in transponder chips that prevent the hybrid system from starting if the key has not been previously registered in the vehicle's on-board computer. Never leave the key ...