This feature is used to prevent ice from building up on the windshield and wiper blades.

- Vehicles with a navigation system.

Owners of models equipped with a navigation system should refer to the “Navigation System Owner’s Manual”.

- Vehicles without a navigation system. 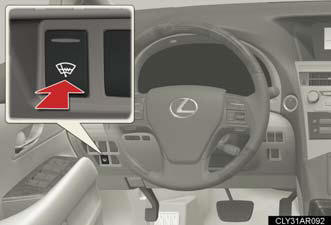 The windshield wiper de-icer will automatically turn off after approximately 15 minutes.

The “POWER” switch must be in ON mode.

CAUTION:
When the windshield wiper de-icer is on.

Do not touch the lower part of the windshield or the side of the front pillars, as the
surfaces can become very hot and burn you.

Kinetic Dynamic Suspension System (KDSS)
KDSS is standard on the Lexus GX 460, and enhanced for 2010 with steering and yaw sensors. By adjusting roll resistance provided by the front and rear stabilizer bars, KDSS can reduce maximum body ...

What’s it up against?
Equipped with a V8 engine, the GS’ biggest traditional rivals come from Germany – namely the BMW 550i and Mercedes-Benz E550. But can-do home-market competitor Infiniti’s new M56 presents serious ...