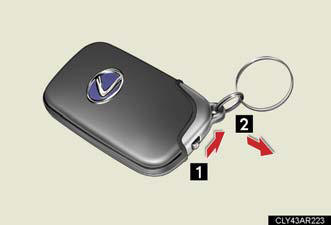 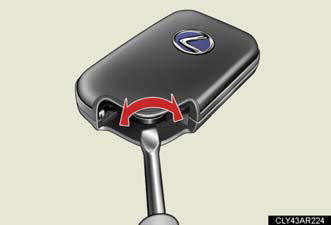 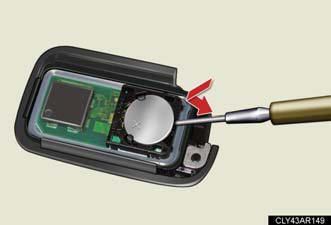 Insert a new battery with the “+” terminal facing up.

l Batteries can be purchased at your Lexus dealer, local electrical appliance shops or camera stores.

Replace only with the same or equivalent type recommended by the manufacturer.

Dispose of used batteries according to the local laws.

The following symptoms may occur: The smart access system with push-button start and wireless remote control will
not function properly.

The operational range is reduced.

When the card key battery needs to be replaced (if equipped)

These parts are small and if swallowed by a child, they can cause choking.

NOTICE:
For normal operation after replacing the battery Observe the following precautions to prevent accidents: Always work with dry hands.

Do not touch or move any other components inside the remote control.

Do not bend either of the battery terminals.

Lexus RX 330 Review
Ever diligent in its "Relentless pursuit of perfection," Lexus completely revamped its RX 300 midsize luxury crossover SUV for 2004. This already popular model in the Lexus lineup receiv ...

But does it go?
The ES 350′s V6 – shared with a handful of Toyota and Lexus products – has become almost legendary for its refinement, if not its broad power range. Silky-smooth at idle, its lack of intrusi ...