If your vehicle overheats

If your engine overheats:

1. Stop the vehicle in a safe place and turn off the automatic air conditioning system.

2. Check to see if steam is coming out from under the hood.

If you see steam:
Stop the engine. Carefully lift the hood after the steam subsides and then restart the engine.

If you do not see steam: Leave the engine running and carefully lift the hood.

4. Check to see if the cooling fan is operating.

If the fan is operating: Wait until the temperature of the engine (shown on the instrument cluster) begins to fall and then stop the engine.

If the fan is not operating: Stop the engine immediately and call your local Lexus dealer. 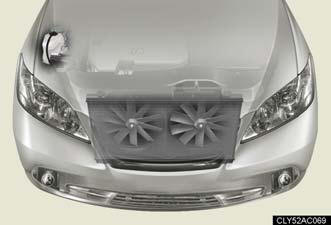 After the engine has cooled down sufficiently, check the engine coolant level and inspect the radiator core (radiator) for any leaks. 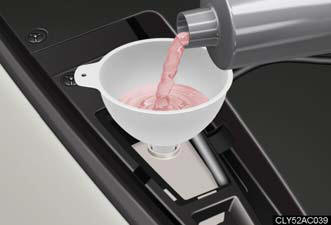 Water can be used in an emergency measure if engine coolant is unavailable. 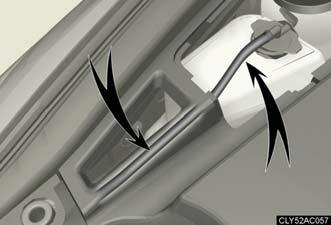 Make sure that the engine coolant reservoir hose is positioned as shown in the illustration.

Have the vehicle checked at your nearest Lexus dealer as soon as possible.

If you observe the following, your vehicle may be overheating.

- The engine coolant temperature gauge enters the red zone or a loss of power is experienced.

- Steam is coming from under the hood.

CAUTION:
To prevent an accident or injury when inspecting under the hood of your vehicle
- If steam is seen coming from under the hood, do not open the hood until the steam has subsided. The engine compartment may be very hot, causing serious injury such as burns.

- Keep hands and clothing away from the fan and other belts while the engine is running.

- Do not loosen the radiator cap while the engine and radiator are hot.

Serious injury, such as burns, may result from hot coolant and steam released under pressure.

When adding coolant, do so slowly. Adding cool coolant to a hot engine too quickly
can cause damage to the engine.

Luxury/Comfort/Convenience
Lexus' craftsmanship and attention to detail provide true luxury by design in the Lexus ES 350. Standard leather-trimmed seating is available in three colors. For 2010, the Ultra Luxury Package ad ...