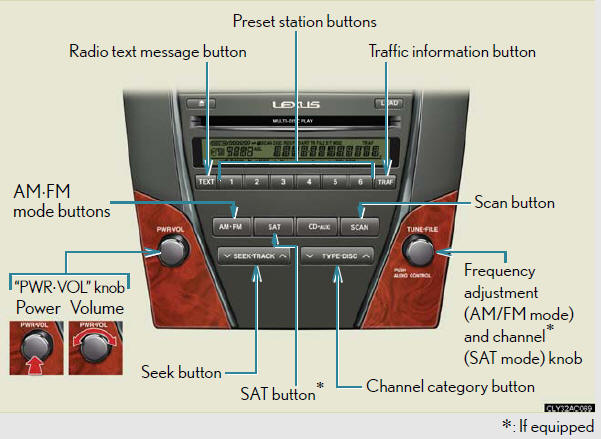 1. Search for desired stations by turning


2. Press and hold the switch (from

) the station is to
be set to until you hear a beep.

until you hear
a beep.

Preset stations will be played for 5 seconds each.

2. When the desired station is reached, press the switch once again.

Scanning all radio stations within range


All stations with reception will be played for 5 seconds each.

2. When the desired station is reached, press the switch once again.

This feature allows your radio to receive station identification information and program information (classical, jazz, etc.) from radio stations which broadcast this information.


The type of program changes each time the button is pressed.

If the system receives no RDS stations, “NO PTY” appears on the display.


The radio seeks or scans the station by the relevant program type.


A text message is displayed when “MSG” is shown on the screen.

If the text continues past the end of the display,

is displayed. Press and
hold

to select the desired channel
in the all categories or press

to select the desired channel in
the current category.

Select the desired channel. Press and hold the button (from

) the channel is to be set to until
you hear a beep.

Scanning the channels in the current category 1. Press


2. When the desired channel is reached, press the button again.

2. When the desired channel is reached, press the button again.


The display will show up to 10 characters.

The display changes as follows each time the button is pressed.

When the battery is disconnected

All preset stations are erased.

It is difficult to maintain perfect radio reception at all times due to the continually
changing position of the antenna, differences in signal strength and surrounding objects, such as trains and transmitters.

An XM® Satellite Radio is a tuner designed exclusively to receive broadcasts provided
under a separate subscription. Availability is limited to the 48 contiguous states and 10 Canadian provinces.

- XM® subscriptions
For detailed information about XM® Satellite Radio or to subscribe: U.S.A.
Visit on the web at www.xmradio.com or call 1-877-515-3987.

- Radio ID
You will need the radio ID when activating XM® service or reporting a problem.

, and the
receiver's 8-character ID number will appear.

- Satellite tuner
The tuner supports only Audio Services (Music and Talk) and the accompanying Text Information of XM® Satellite Radio.

If the satellite radio does not operate normally

If a problem occurs with the XM® tuner, a message will appear on the display. Refer
to the table below to identify the problem, and take the suggested corrective action.

There is a short-circuit in the antenna or the surrounding antenna cable. See a Lexus certified dealer.

You have not subscribed to the XM® Satellite Radio.

The radio is being updated with the latest encryption code. Contact the XM® Satellite Radio for subscription information. When a contract is canceled, you can choose the “CH000” and all free-to-air channels.

The premium channel you selected is not authorized.

Wait for about 2 seconds until the radio returns to the previous channel or “CH001”. If it does not change automatically, select another channel. If you want to listen to the premium channel, contact the XM® Satellite Radio.

The XM® signal is too weak at the current location.

Wait until your vehicle reaches a location with a stronger signal.

The unit is acquiring audio or program information.

Wait until the unit has received the information.

The channel you selected is not broadcasting any programming.

There is no song/program title or artist name/feature associated with the channel at that time. No action needed.

The channel you selected is no longer available. Wait for about 2 seconds until the radio returns to the previous channel or “CH001”. If it does not change automatically, select another channel.

Certifications for the radio tuner

This equipment has been tested and found to comply with the limits for a class B
digital device, pursuant to Part 15 of the FCC Rules. These limits are designed to
provide reasonable protection against harmful interference in a residential installation.

This equipment generates, uses and can radiate radio frequency energy and, if not installed and used in accordance with the instructions, may cause harmful interference
to radio communications. However, there is no guarantee that interference will not occur in a particular installation.

If this equipment does cause harmful interference to radio or television reception,
which can be determined by turning the equipment off and on, the user is encouraged
to try to correct the interference by trying one or more of the following: - Reorienting or relocate the receiving antenna.

- Increasing the separation between the equipment and receiver.

- Connecting the equipment into an outlet on a circuit different from that to which
the receiver is connected.

- Consulting the dealer or an experienced radio/TV technician for help.

But does it go?
With less horsepower on tap than its V8 rivals, the GS 460 won’t win stoplight races. That hardly means that it’s a slouch, however, its eight-speed automatic firing off quick shifts even when lef ...