Select a shift position appropriate for the driving conditions.

While the “ENGINE
START STOP” switch is
in IGNITION ON
mode, depress the brake
pedal and move the shift lever. 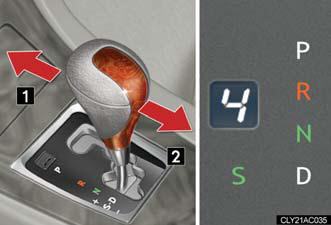 Shift ranges and their functions

Automatically selecting gears between 1 and 6 according to vehicle speed and driving conditions. However, the gear is limited according to selected shift range.

- You can choose from 6 levels of engine braking force.

- A lower shift range will provide greater engine braking force than a higher shift range, and the engine speed will also increase.

To help ensure safety and driving performance, downshifting operation may sometimes
be restricted. In some circumstances, downshifting may not be possible even when the shift lever is operated. (The warning buzzer will sound twice.)

The engine brake will not operate in the S mode, even when downshifting to 5 or 4.

This may indicate a malfunction in the automatic transmission system. Have the
vehicle inspected by your Lexus dealer immediately.

(In this situation, the transmission will operate in the same as manner as when the
shift lever is in D.)

When the shift range is 5 or lower, holding the shift lever toward “+” sets the shift
range to 6.

- To prevent excessive engine speed, a function was adopted that automatically selects a higher shift range before engine speed becomes too high.

- To protect the automatic transmission, a function is adopted that automatically
selects a higher shift range when the fluid temperature is high.

AI-SHIFT automatically selects the suitable gear according to driver performance
and driving conditions.

AI-SHIFT automatically operates when the shift lever is in the D position. (Shifting
the shift lever to the S mode driving position cancels the function.)

Driving assist systems
To help enhance driving safety and performance, the following systems operate automatically in response to various driving situations. Be aware, however, that these systems are supplementary and sho ...