Perform the following steps to open the fuel tank cap.

Turn the “ENGINE START STOP” switch OFF and ensure that all the doors and windows are closed. 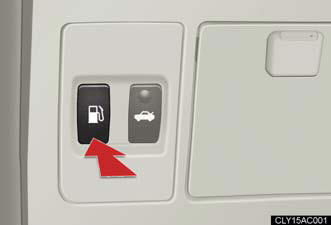 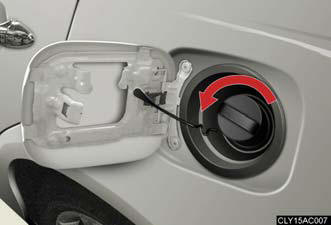 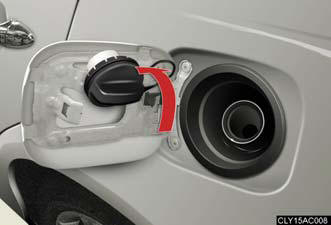 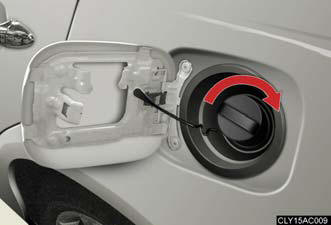 When replacing the fuel tank cap, turn it until a clicking sound is heard.

After releasing your hand, the cap will turn slightly to the opposite direction.

When the fuel filler door opener is inoperable 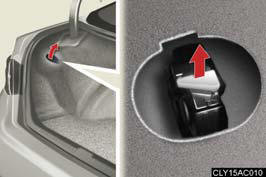 - Touch the vehicle or some other metal surface to discharge any static electricity.

Sparks resulting from discharging static electricity may cause the fuel vapors to
ignite.

- Always hold the grips on the fuel tank cap and turn it slowly to remove it.

A whooshing sound may be heard when the fuel tank cap is loosened. Wait until the sound cannot be heard before fully removing the cap. In hot weather, pressurized
fuel may spray out the filler neck and cause injury.

- Do not allow anyone that has not discharged static electricity from their bodies to
come close to an open fuel tank.

- Do not inhale vaporized fuel.

- Do not smoke while refueling the vehicle.

- Do not return to the vehicle or touch any person or object that is statically charged.

Failure to do so may cause a fire or other incident which may result in death or serious
injury.

NOTICE:
Refueling
Do not spill fuel during refueling.

Failing to do so may damage the vehicle, such as causing the exhaust systems to operate abnormally or damaging fuel system components or the vehicle's painted surface.

Safety
Packed with 10 airbags and the requisite safety features found in luxury cars these days, the 2010 RX was named a Top Safety Pick by the Insurance Institute for Highway Safety in 2009. For 2010, t ...