Release the lock from the inside of the vehicle to open the hood. 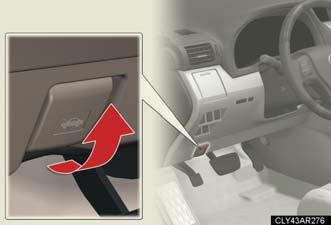 The hood will pop up slightly.

Pull up the hood catch and lift the hood.

CAUTION:
Pre-driving check
Check that the hood is fully closed and locked.

If the hood is not locked properly, it may open while the vehicle is in motion and
cause an accident, which may result in death or serious injury.

Safety
Talk about fully loaded! The 2010 GX 460 is chock-full of safety features, including front knee airbags, side-impact airbags for the first and second rows, and side curtain airbags for all three r ...

But does it go?
The ES 350′s V6 – shared with a handful of Toyota and Lexus products – has become almost legendary for its refinement, if not its broad power range. Silky-smooth at idle, its lack of intrusi ...