The rear sunshade can be raised and lowered by operating the switch shown below. 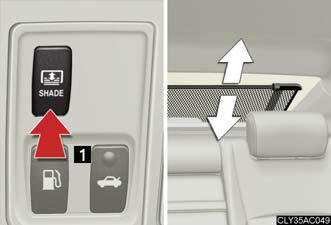 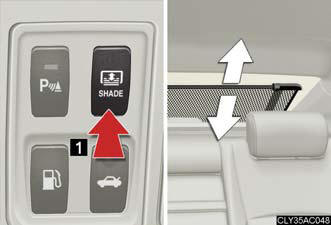 The rear sunshade can be used when

The “ENGINE START STOP” switch is in IGNITION ON mode.

When the reverse operation feature does not operate

CAUTION:
When the rear sunshade is being raised or lowered Do not place fingers or other objects in the fastener section or in the opening.

They may get caught, causing injury.

NOTICE:
To prevent the battery from being discharged Do not operate the rear sunshade when the engine is not running.

To ensure normal operation of the sunshade Observe the following precautions.

- Do not place excessive load on the motor or other components.

- Do not place objects where they may hinder opening and closing operations.

- Do not attach items to the rear sunshade.

- Keep the opening clean and clear of obstructions.

- Do not operate the rear sunshade continuously over long periods of time.

Bluetooth® audio system setup
System setup items and operation procedures - Pattern A. To enter the menu for each function, follow the steps below using a voice command or : - Pattern B. 1. Press to select “BT•A MENU”. 2. Se ...

INTERIOR
The interior of the RX 350 is surprisingly understated and simple. The wood trim looks nice, but the black- and silver-colored plastic surfaces could have appeared more upscale. After testing a ...