Use the cruise control to maintain a set speed without using the accelerator. 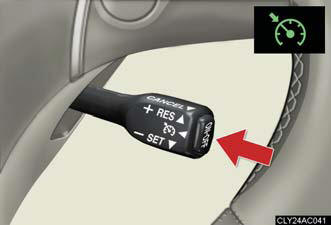 Turn the “ON-OFF” button ON.

Push the button once more to deactivate the cruise control. 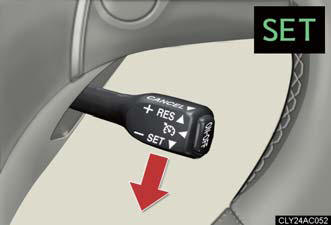 Accelerate or decelerate to the desired speed and press the lever down to set the cruise control speed. 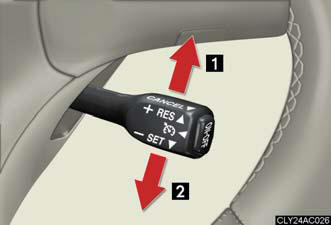 Pull the lever towards you to cancel cruise control.

To resume cruise control and return to the set speed, push the lever up.

Fine adjustment of the set speed

Fine adjustment of the set speed (approximately 1.0 mph [1.6 km/h]) can be made
by lightly pressing the lever up or down and releasing it.

The set speed is automatically cancelled in any of the following situations.

- Actual vehicle speed falls more than approximately 10 mph (16 km/h) below the preset vehicle speed
At this time, the memorized set speed is not retained.

Turn the ON-OFF button off once, and then reactivate the system.

CAUTION:
To avoid inadvertent cruise control activation Keep the ON-OFF button off when not in use.

Doing so may result in control of the vehicle being lost and could cause an accident
resulting in death or serious injury.

- On roads with sharp bends.

- On slippery roads, such as those covered with rain, ice or snow.

- When towing a trailer or emergency towing.

DYNAMIC PACKAGE
The new Lexus CT 200h has been specifically developed to combine superior handling and a rewarding driving experience with the ride comfort expected of any Lexus. The Lexus CT 200h benefits from ...

Customizable features
Your vehicle includes a variety of electronic features that can be personalized to your preferences. Programming these preferences requires specialized equipment and may be performed by an authori ...